About the Server Industry

A server is a system that processes, stores, sends, and retrieves information on a network. Servers typically connect to other devices over a network. The most expensive components of a server are its processing power which is often a CPU, storage which generally consists of Solid State Drives (SSDs), and memory which typically consists of DRAM. The unique computing requirements of Machine Learning and Artificial Intelligence have coincided with the rising importance of GPUs, which are traditionally part of a video card. There are many different kinds of servers.  The most common server classifications are Tower Servers (servers that look like a traditional desktop computer), Rack Servers (servers that fit into a rack like the drawers in a dresser), and Blade servers (servers with minimal components designed for larger data centers). The functional use of servers includes database servers, file servers, mail servers, proxy servers, web servers, computing servers, and application servers, among others. Anyone can convert their computer or smartphone into a server. However, servers are often used in on-premise or cloud data centers. Most servers are purchased from Original Equipment Manufacturers (OEMs) like Dell EMC, HPE, Inspur, Lenovo, and Huawei, and Original Design Manufacturers (ODMs). ODM companies specialize in manufacturing electronic equipment. They sell directly to OEMs and directly to customers with servers designed to specific customer specifications. A server like this from an ODM can also be called a white box server. Many Hyperscalers, companies like Facebook and Google, who operate their own hyperscale data centers, purchase their servers and other data center equipment from ODMs. ODMs are beginning to steal market share from their OEM customers. You can find Server Market Size, Server Market Share, and other trends and statistics below. You can get help with additional Server industry market research here. 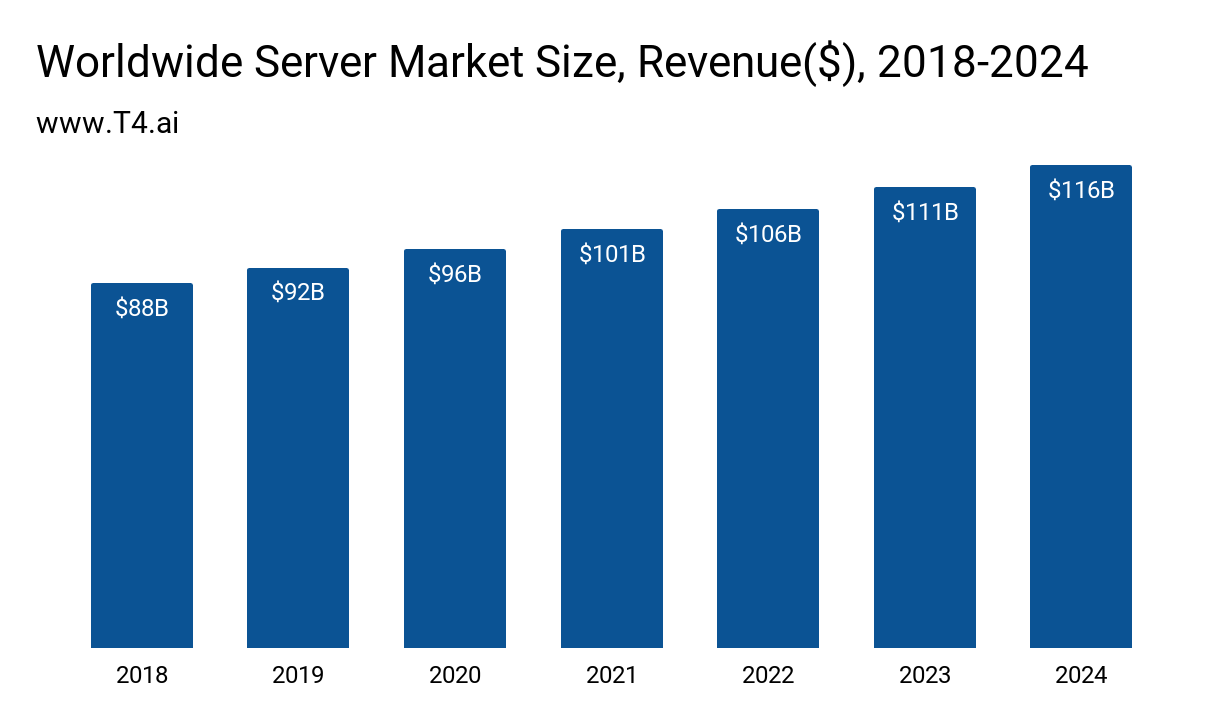 The chart shows the Server Market Size from 2018 to 2024. In 2019, the size of the Server Industry was $92B in server revenue and is projected to grow by 4.9% in 2020. During the historical and forecast period of 2018 to 2024, the Server Industry growth is forecast to average 0.5% per year (CAGR). These estimates were made before the Coronavirus (COVID-19) pandemic. The short term impact of COVID-19 on the Server market growth will likely be Low because OEMs are providing billions of dollars of financing and flexible payment options to mitigate delayed or reduced IT spend. There are also new demands on cloud infrastructure, particularly from the increased remote work and new video streaming workloads from companies like Netflix and Zoom. The long term impact of COVID-19 on the Server market growth beyond the COVID-19 pandemic will likely be Low because IT is an essential component to modern businesses, and businesses will have to continue scaling their server infrastructure with business needs. Request help with obtaining the source for this data and additional Server industry market research here. 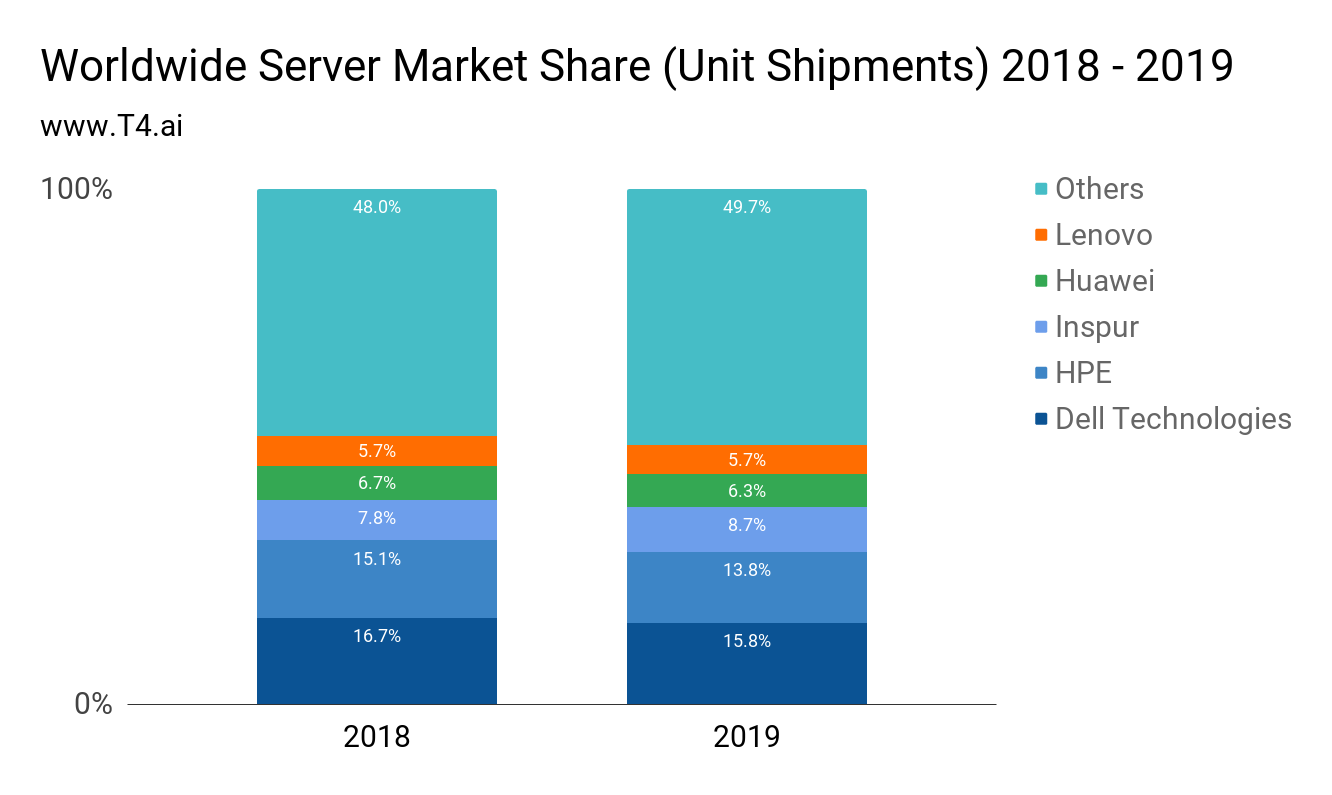 The chart shows worldwide Server Market Share by unit shipments in 2018 and 2019. The global Server Market is composed of many large companies and a long tail of niche vendors. The leading vendor in the Server Industry was Dell Technologies with a 15.8% market share in 2019, followed by HPE with 13.8% server market share, Inspur Power Systems with 8.7% market share, Huawei with 6.3% share, Lenovo with 5.7% share, and Others with 49.7% share. "Other" server vendors include a long tail of vendors and ODMs. Hyperscale companies typically ask ODMs to manufacture servers to their unique specifications for their hyperscale data centers. Despite OEMs also purchasing equipment from ODMs, many companies are replacing on-premise equipment with cloud services. This means IT equipment purchasing shifts from the end-user who is an OEM buyer, to a cloud provider who likely buys from ODMs. As quarter to quarter enterprise server market share can oscillate, especially for server shipments, the best way to measure changes in server market share is to view a year over year comparison. Get help with market research for the Server market, including the source for this Server Market Share chart and other data here.

The explosion of global cloud computing and global data needs is the biggest driver of the enterprise server market. At the same time, the server market is influenced by oscillating semiconductor prices, increasing competition between OEMs and ODMs, and the difficulty for cloud infrastructure companies to forecast future demand. Nobody can deny the growth of cloud computing. Servers are the components in each data center that conduct many cloud functions. While enterprise server market growth over time is certain, server market growth quarter over quarter or year over year is more difficult to predict. Hyperscale providers, the largest of which are companies like Google, Microsoft, Amazon, Apple, Facebook, and Alibaba, are notoriously bad at predicting future cloud demand. Therefore, they must err on the side of over-buying when purchasing equipment for their hyperscale data centers. Hyperscale data centers can consist of servers and other parts from both OEMs or ODMs. The most sophisticated companies often design their servers and other components and work with ODMs to manufacture them. At the same time, storage and memory are some of the most essential parts of a server. Because they are commodity products, their prices can oscillate wildly, impacting the cost of servers. These price oscillations happened most recently in 2018 when NAND and DRAM prices more than doubled amid a supply constraint and then plummeted as soon as new fabs (manufacturing facilities) came online. The shift to cloud computing may gradually change server market share as equipment spend becomes more concentrated with cloud providers who more commonly purchase from ODMs.

The server industry is a mature market composed of several large manufacturers and a long tail of niche competitors. Dell Technologies market share was 15.8% of the Server market in 2019. Dell Technologies is the parent company of numerous IT vendors - Dell, Dell EMC, Pivotal, RSA, Secureworks, Virtustream, and VMware. Dell EMC, which formed when Dell acquired EMC in 2015, is responsible for the majority of Dell Technologies' server sales. IDC recognizes DELL EMC as a Major Player and Leader in its server-related Marketscapes, and Gartner recognizes Dell EMC as a Leader in its server-related Magic Quadrants. HPE market share was 13.8% of the server market in 2019. Hewlett Packard Enterprise (HPE) was created when Hewlett Packard split into HPE and HP Inc in 2015. HPE has a range of products, including Intelligent Edge, Hybrid IT (Hybrid Cloud servers, Hyperconverged Infrastructure and High Performance Computing products), HPE Server, HPE Networking, and HPE Storage. HPE occupies similar positions to Dell Technologies in IDC Marketscapes and Gartner Magic Quadrants. Inspur Power Systems market share was 6.3% of the Server market in 2019. Inspur Power Systems is a mainland China-based enterprise IT company. Inspur sells a range of enterprise server products for cloud, hyperconverged infrastructure (HCI), artificial intelligence, edge computing, and other applications. Inspur is the leading server company in China but is beginning to receive recognition from IDC and Gartner. Huawei market share was 6.3% of the Server market in 2019. Huawei is another mainland China-based company that produces a range of consumer and enterprise products. While Huawei has struggled to gain acceptance in the US, it has had great success with its enterprise products in China, and some success in other markets.

What Additional Server Industry Data Does T4 Have?