GPU stands for Graphics Processing Unit, an electronic circuit designed to manipulate computer graphics and process images. In other words, GPUs help generate the images you see on a computer or mobile phone, especially for processing intensive applications like video games. Similar in some ways to the CPU, it takes on a lot of the computing required by mobile phones, computers, and game consoles, but focuses on working with the graphics and visuals. In the mass market they are known for giving modern video games their beauty and realism. Discrete top-of the line GPUs from Nvidia and AMD can cost several $1000’s. Additionally, their highly parallel computing structure makes them more efficient than CPUs for algorithms that work with large blocks of data in parallel. Because of this, GPUs are becoming increasingly used in the field of Artificial Intelligence (AI), Machine Learning (ML), and even cryptocurrency mining. GPU market share is highly concentrated among Nvidia, Intel, and AMD, with Nvidia market share leading the group. You can find GPU Market Size, GPU Market Share, and other trends and statistics below. You can get help with additional GPU industry market research here. 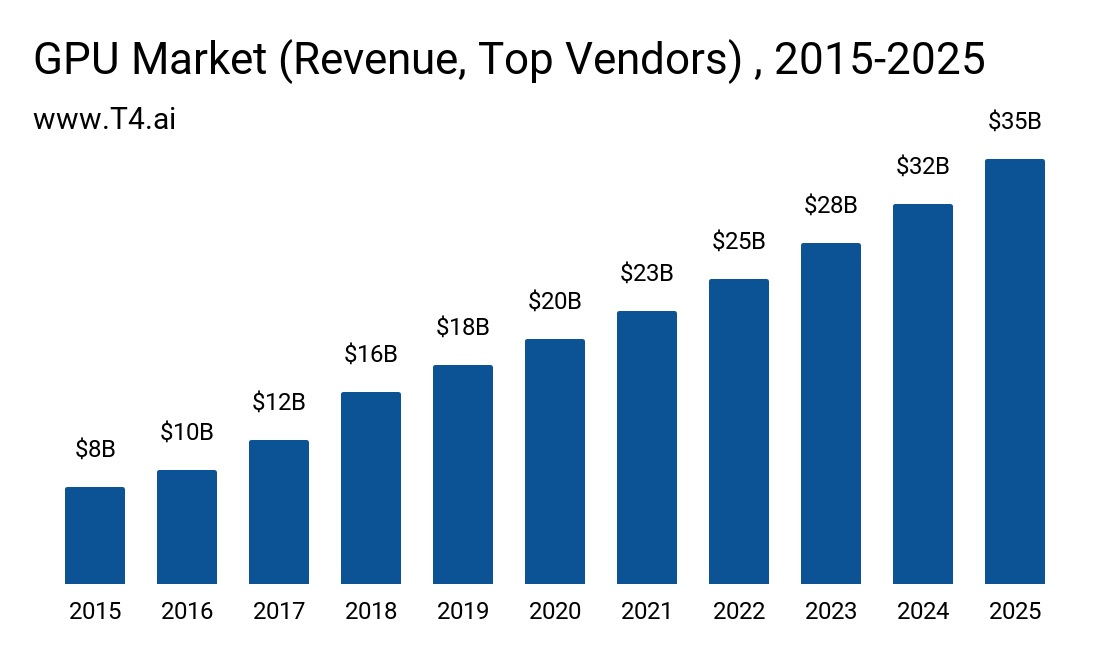 The chart shows the GPU Market Size from 2015 to 2025 of the top vendors, Nvidia, AMD, and Intel. Because of the complexity of designing and manufacturing GPUs, there are few other competitors and the three companies’ revenues are an accurate proxy for the state and size of the industry. In 2020, the size of the GPU Industry was $20B and is projected to grow 15% in 2021. From 2015 to 2025 the GPU Industry growth is projected to average 13% growth per year. Incredibly, Nvidia has been the GPU market share leader throughout this growth. These estimates were made before the Coronavirus (COVID-19) pandemic. The short term impact of COVID-19 on the GPU market growth will likely be Medium because companies are delaying or reducing new IT spend. The long term impact of COVID-19 on the GPU market growth beyond the COVID-19 pandemic will likely be Low because AI and gaming won't stop growing in popularity. Request help with obtaining the source for this data and additional GPU industry market research here. 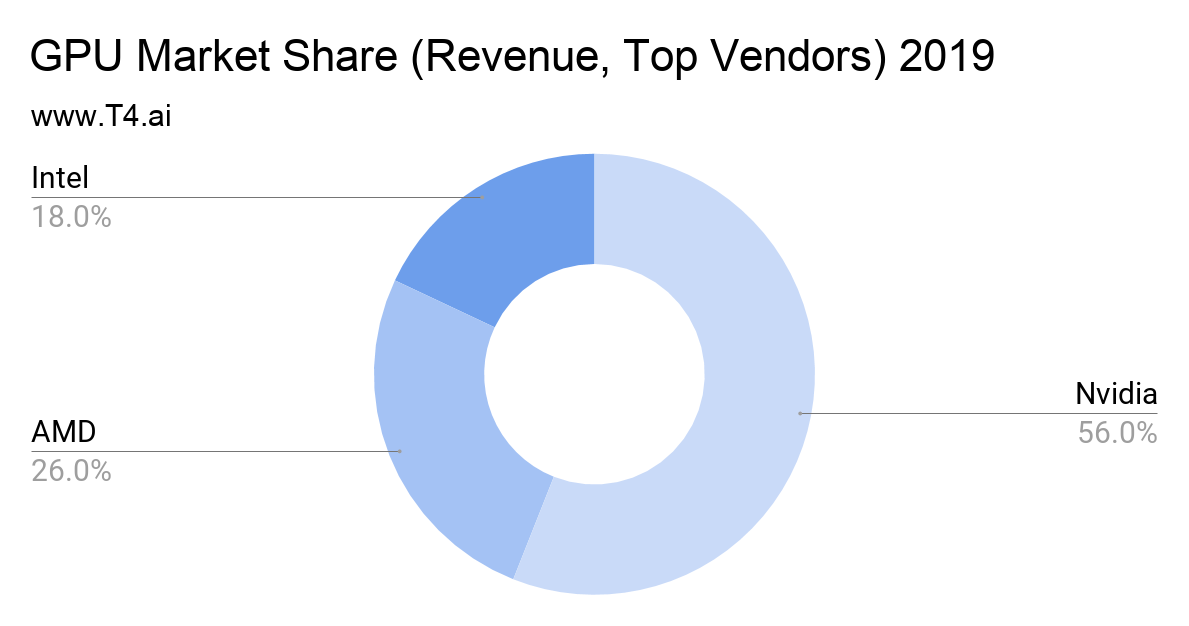 The chart shows GPU Market Share among top vendors in 2019. The GPU Market is concentrated among a few vendors. The leading vendor in the GPU Industry was Nvidia with 56% market share in 2019, followed by AMD with 26% GPU market share, and Intel with 18% GPU market share. Of the top three vendors, Nvidia is the only major player that does not also sell a CPU. Intel, which is the leading CPU manufacturer, now sells GPUs which usually integrate into a motherboard, rather than a standalone GPU that is placed into a slot on a motherboard. AMD, a traditional market of CPUs, purchased ATI, Nvidia’s main GPU competitor, in the hopes of competing better with Intel’s CPUs and Nvidia’s GPUs.  Get help with market research for the GPU market, including the source for this GPU Market Share chart and other data here.

GPUs are an excellent example of technology serving both entertainment and professional purposes. Growth is driven by the developing gaming industry, increasing popularity of AI technology, and cryptocurrency mining. Beautiful and realistic graphics are one of the main selling points of modern video games, meaning top-of-the-line graphics cards will always be in high demand. VR, which is highly demanding in terms of graphics processing power, is also gaining popularity. GPUs also have major benefits due to their highly parallel nature. AI is becoming an integral part of many business solutions, and GPUs are far more effective at handling AI operations than CPUs. By coincidence, the parallel nature of GPU computations makes GPUs more effective than CPUs for cryptocurrency mining and large movements in the cryptocurrency markets can affect the attractiveness of mining and therefore GPU sales. Given the rise of new GPU applications, there are many application specific processing units that are coming to market and that will increasingly compete with GPUs, such as Google’s TPUs and blockchain-specific processors. Despite high GPU industry growth and the many new applications of GPUs, Nivida has maintained its GPU market share lead.

What Additional GPU Market Data Does T4 Have?