Apple Inc. is an innovative technology leader that revolutionizes nearly every industry it touches. Apple's first product was the Apple 1 computer. It now sells smartphones (iPhone), tablets (iPad), smartwatches (Apple Watch), music (iTunes and Apple Music), smart speakers (Homepod), and a range of other products. Apple created many of these industries. Apple was founded by Steve Jobs and Steve Wozniak. Its revenue increased by 5% from 2019 to 2020 to $274B. The company has 147,000 employees. It would have been difficult to predict that Apple would have expanded into so many industries, many of which are hardly related to its origins with the Apple 1, and the now famous Macintosh (Mac) Computer. With its sleek design and devotion to making easy to use products, Apple leads many industries it touches. Following the death of Steve Jobs in 2011, Tim Cook, Apple's then Chief Operating Officer, took over as CEO. Despite questions about whether Apple would continue to be a technology leader without the inspirational Steve Jobs, Apple has continued to innovate and grow. You can find additional information about Apple, Apple's products, the industries in which Apple competes, and Apple market share below. 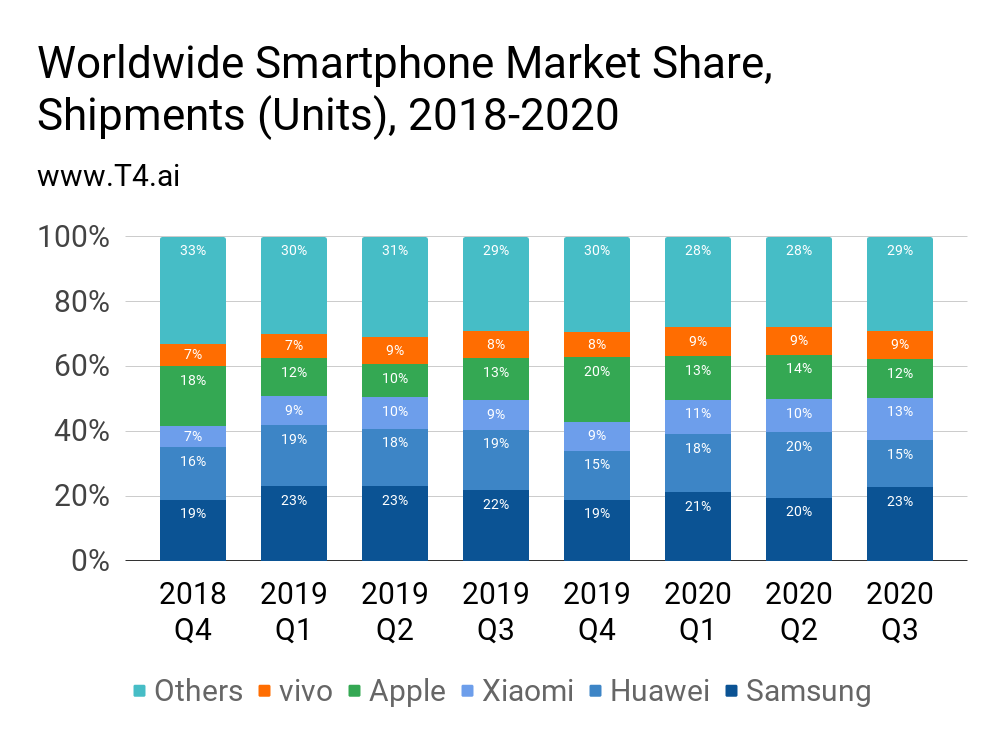 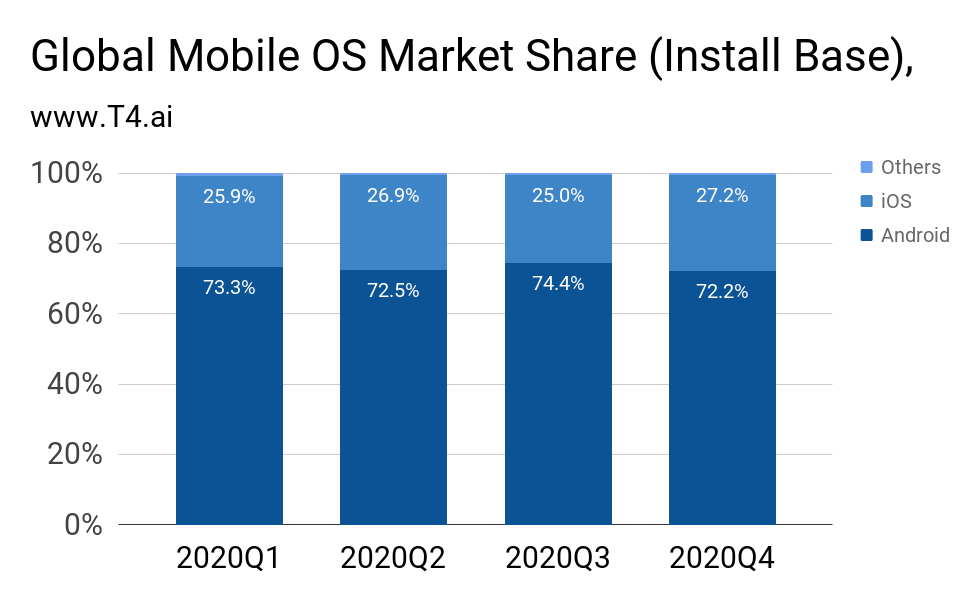 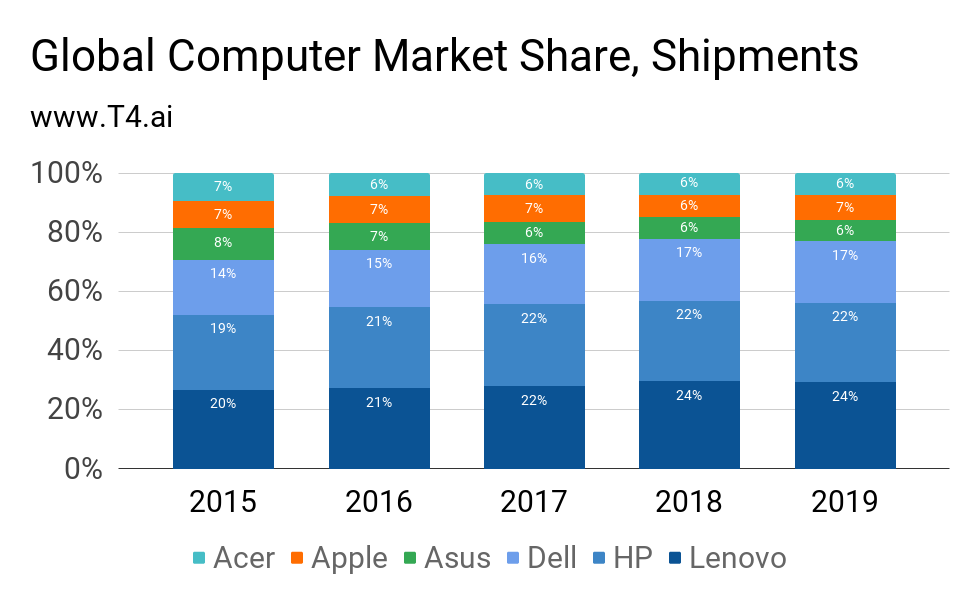 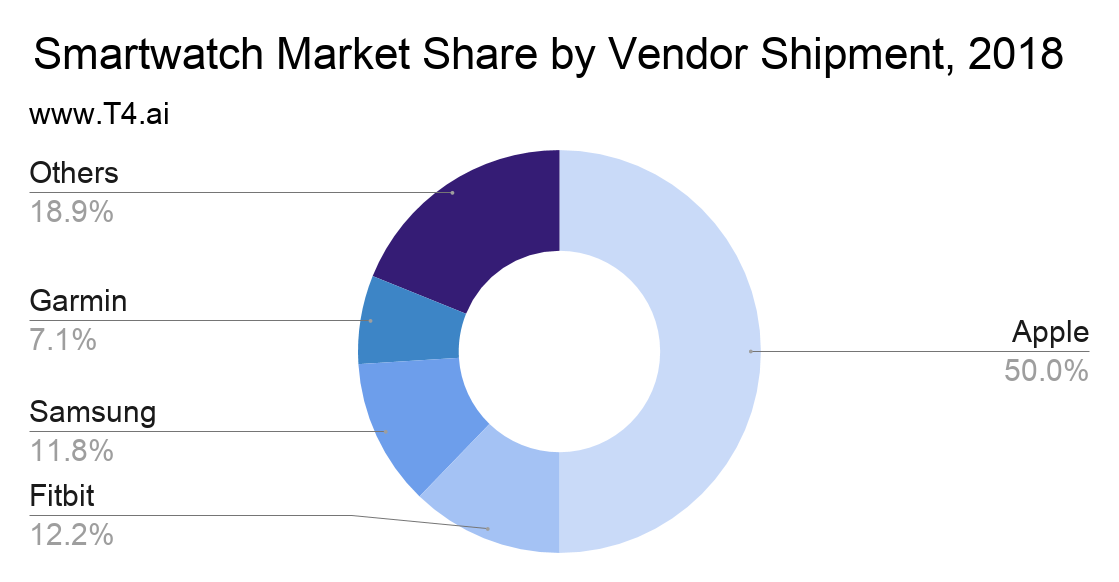 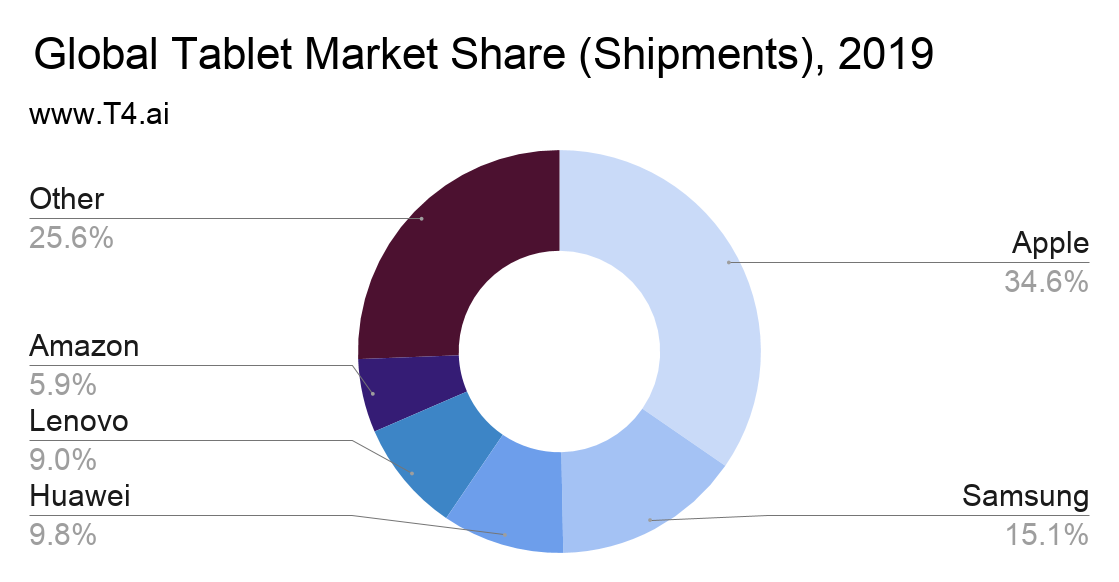 Apple positions itself with high-end, premium products. Apple market share tends to lead the pack in many of its markets. Where Apple market share does not lead in terms of shipments, it often leads in dollar sales. Unlike most of its software and hardware competitors, Apple prefers to create closed, integrated platforms that ensure a smooth user experience. This sets it apart from competitors who typically make either the software or the hardware for their products. Apple competes closely with a handful of companies within each of its industries. Apple's markets generally contain many large competitors and a long tail of smaller ones.
‍
Samsung competes with Apple primarily in the premium smartphone and tablet markets. Samsung sells its flagship Samsung Galaxy line of tablets and smartphones, as well as several other models. Samsung Galaxy phones and tablets range from premium smartphones and tablets to cheaper alternatives. Unlike Apple's iOS mobile operating system, Samsung runs its products primarily on Google Android.
‍
Google and Apple were close partners when Apple launched its first iPhone in 2007. This partnership fell apart when Google launched the open-source Android mobile operating system. Android now powers nearly all non-iOS mobile devices. Google competes directly against the Apple iPhone in the smartphone market with the Google Pixel smartphone, in the personal computer market against the Mac and Macbook with its Chrome book and Pixelbook, as well as in a range of other industries.
‍
Microsoft and Apple have been competitors in the personal computer space for four decades. Microsoft's Windows Operating System, which is used on most non-Apple OS systems, competes directly with Apple's OS X and Mac/Macbook line of laptops and computers. While Microsoft used to focus on software, Microsoft now also sells high-end Surface Tablets that compete with the iPad, as well as Surface laptops that compete with the Macbook. Microsoft and Apple inevitably compete in a range of other industries as well.

In addition to the traditional large competitors, Apple increasingly faces competition from rising Chinese companies across its product lines. Xiaomi and Huawei directly compete with Apple's hardware products, like the iPhone, iPad, and Mac, although often at a much lower price point. Therefore shipments understate Apple market share in terms of revenue. Chinese companies are slowly expanding their reach into markets outside of China, especially the Asia-Pacific and European regions.  Apple competes with these and other companies with a range of other products, including Apple Maps (Location Services), Apple Pay (Payments), Apple Music (Streaming), iCloud (Cloud Storage), Apple TV (Over-the-Top streaming devices), and Apple Keychain (Password and Identity Management).