About the Footwear Industry

The Footwear industry consists of companies engaged in the manufacturing of footwear such as dress shoes, sneakers, slippers, boots, galoshes, sandals, and athletic and trade related footwear. The industry also includes footwear parts such as shoelaces, buckles, clasps, inner soles, heels, and padding. The Footwear industry excludes leather stock for shoes, classified in Textiles & Leather Goods. Footwear is made up of different materials such as leather, plastic, rubber, and fabric. Among these, leather is one of the prominent materials.

Footwear has been in use since the earliest human history, archeological finds of complete shoes date back to the Chalcolithic (ca. 5.000 BCE). Some ancient civilizations, such as Egypt and Greece however saw no practical need for footwear due to convenient climatic and landscape situations and used shoes primarily as ornaments and insignia of power.

During the 16th century, royalty such as Catherine de Medici and Mary I of England began wearing high-heeled shoes to make them look taller or larger than life. By 1580, men also wore them, and a person with authority or wealth might be described as well-heeled. In modern society, high-heeled shoes are a part of women's fashion and are widespread in certain countries around the world. 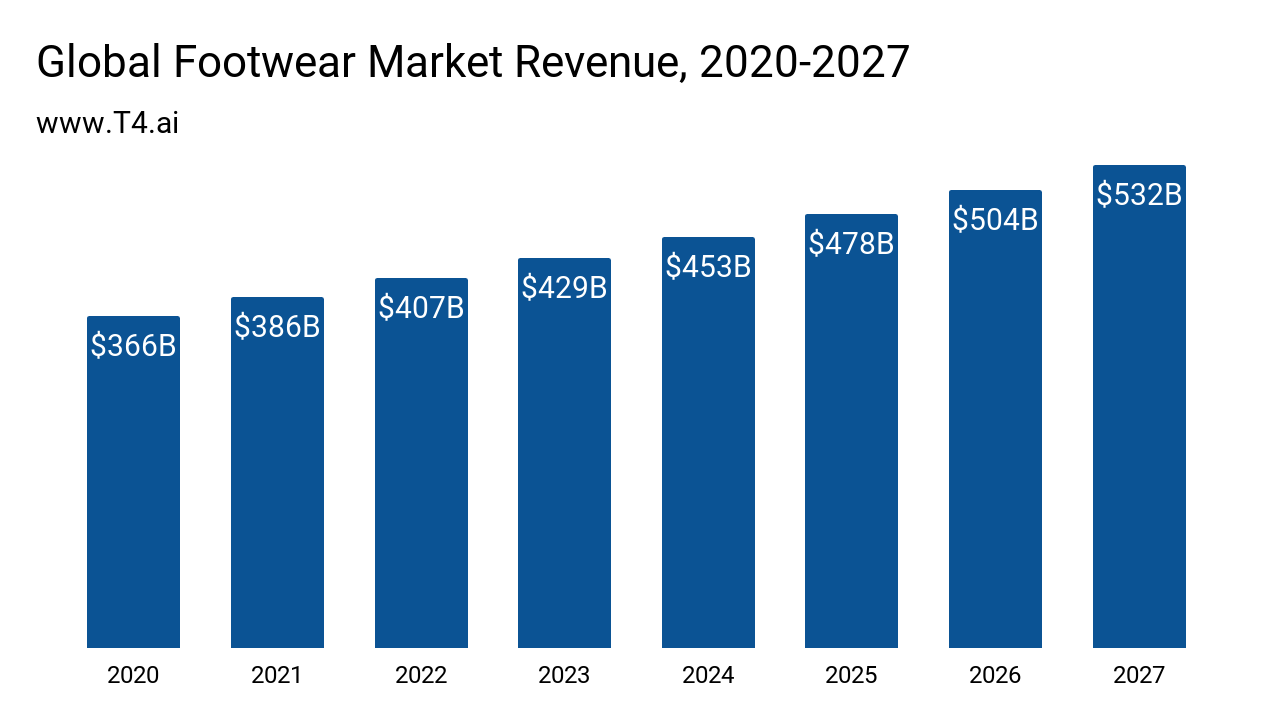 The chart shows the Footwear Market Size over a forecast period from 2020 to 2027. In 2020, the size of the Footwear Industry is estimated to equal $366B and is projected to grow 5% in 2021. From 2020 to 2027 the Footwear Industry growth rate is projected to average 5% per year. Footwear Market Share is highly concentrated in North America and APAC. These estimates were made before the Coronavirus (COVID-19) pandemic. The short term impact of COVID-19 on the Footwear market growth will likely be High because as consumers face the prospect of weeks at home, there has been a huge drop in the demand for apparel. Many brands and retailers have canceled or put orders on hold, or are demanding retroactive price reductions, for goods already in production or completed and ready to ship. In some cases, brands have demanded large rebates, even on orders already in transit from the supplier. The long term impact of COVID-19 on the Footwear market growth beyond the COVID-19 pandemic will likely be Medium because, in the long term, the industry will recover at a slow pace, but at a huge cost in price reductions needed to incentivize the demand. Request help with obtaining the source for this data and additional Footwear industry market research here. 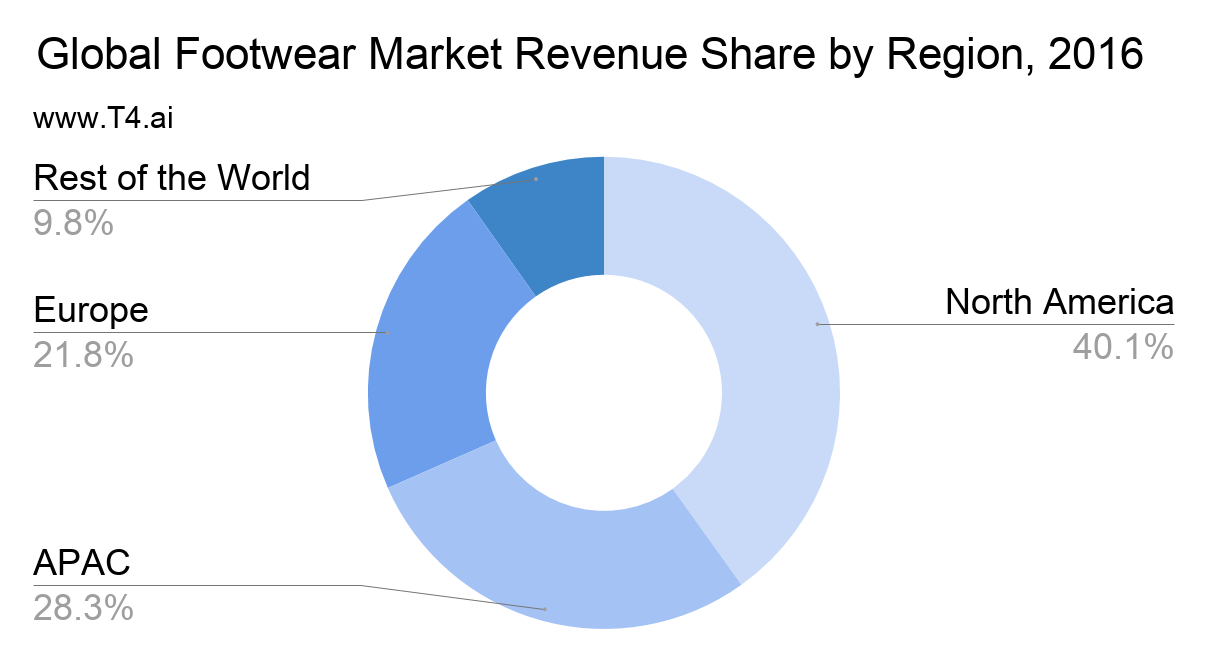 The footwear market growth is driven by increasing disposable income and the overall economic well-being of regions, rising per capita income, favorable demographics, and a shift in preference to branded products. The rising health consciousness, increasing participation in sports, growing concerns about fitness, and increasing engagement in fitness activities are contributing to the rising demand for sport and smart shoes. The adoption of the luxury lifestyle among consumers has influenced the purchasing power to opt for luxury wear among millennials. The increasing fashion trends coupled with the evolving retail landscape across brands have been the key factor for the booming footwear market despite being a mature market. The rising demand for exclusive designer collections has a positive influence on the growth of the footwear market. Consumers are willing to pay premium prices for limited edition designer footwear collections made from high-quality materials. Consumers prefer the aesthetics of materials, such as leather, textiles, and synthetics of footwear products launched under exclusive designer labels. Also, the increase in health awareness is observed among individuals across the world, which has led to an increase in the number of individuals visiting fitness centers and performing indoor & outdoor exercise activities. This, in turn, has boosted the demand for athletic footwear among all age groups. The advanced technology and software in a smart shoe helps in monitoring the fitness and performance activities of on-field players and athletes.

What Additional Footwear Industry Data Does T4 Have?