Netflix Inc. is an American over-the-top content platform, or putting it simpler - a video streaming service. The platform is so popular that “watching Netflix” has become almost synonymous with home entertainment and live streaming in general. The streaming giant is available on almost every imaginable device and in over 190 countries across the world. You can even watch its video content on certain smart fridge models!

Netflix was founded in 1997 by Reed Hastings and Marc Randolph with a DVD sales and rental by mail business model. More than 2 decades later, the company has evolved to be the largest video streaming service on the planet with over 200 million subscribers. In 2020 Netflix’s revenue increased by 25% from 2019 to $25B. The company has 9400 employees.

A turning point for the business happened around 2012 when Netflix took more of an active role as producer and distributor for both TV shows and movies. Its first original series which debuted in 2013 - House of Cards - was a success. Netflix didn’t stop there and has continued pumping out new content increasing both quality and quantity. The Irishman, a Netflix original movie from 2020 even received 10 Academy Awards nominations. You can find additional information about Netflix, Netflix’s business model, and Netflix market share below. 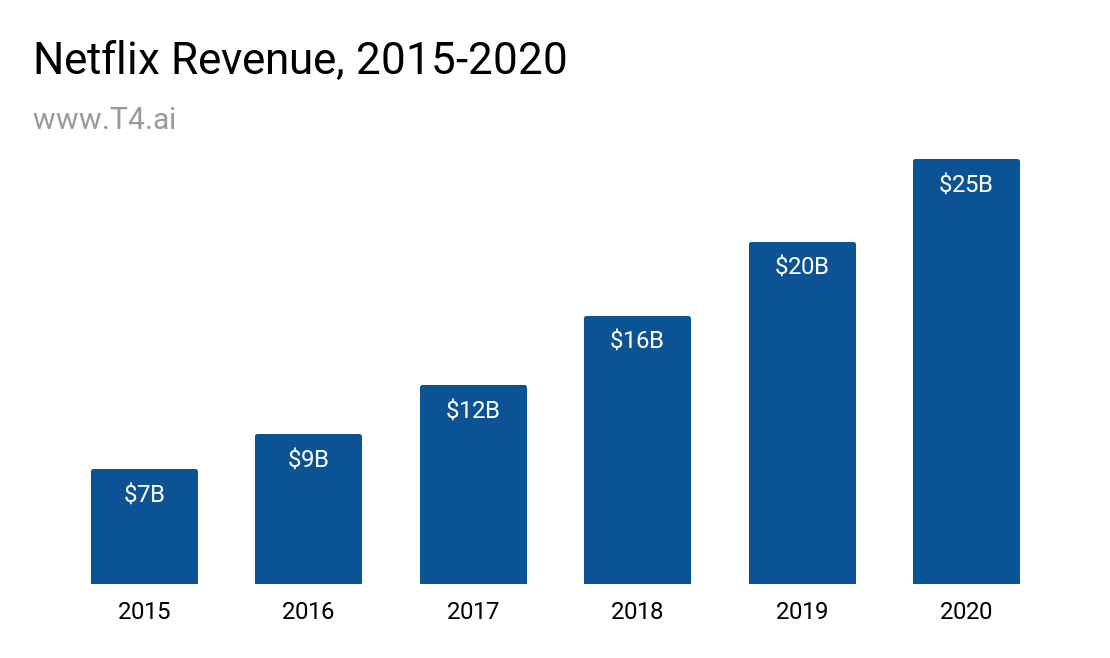 The chart shows Netflix total revenue over a period from 2015 to 2020. Netflix Revenue was $25B in 2020, increasing 25% from 2019. Netflix benefited from the increased demand for home entertainment during the COVID-19 pandemic in 2020, however, its growth hasn’t been as explosive as before. Competing platforms have been gaining a lot of traction in the last few years, and 2020 was beneficial for all of them. View the source for this Netflix’s Revenue chart and other Netflix data here. 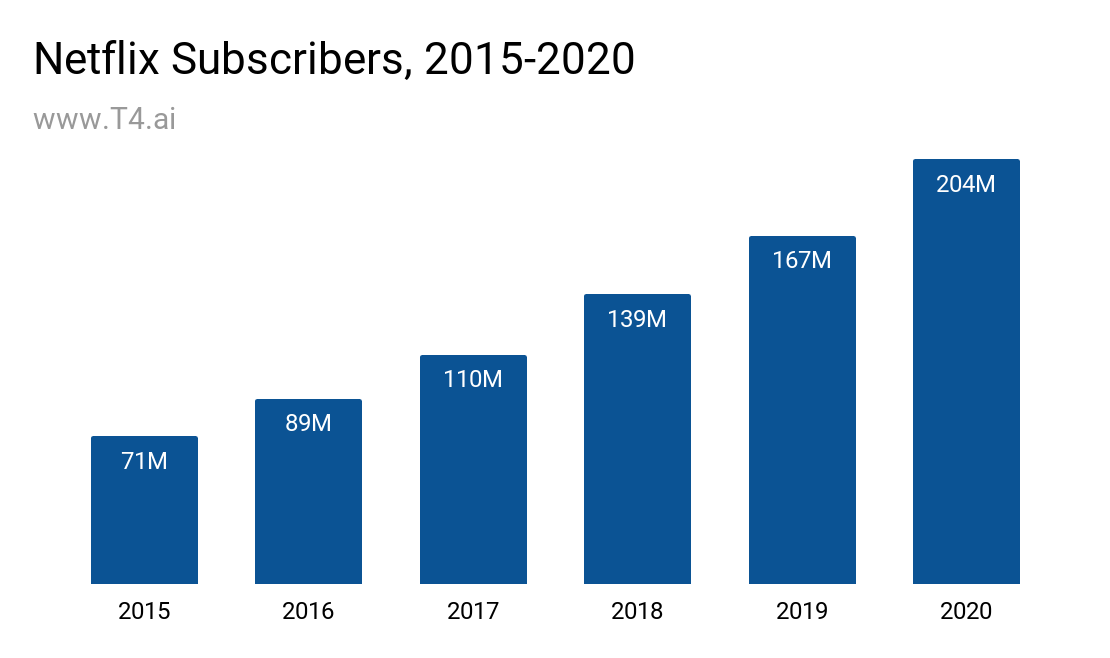 The chart shows Netflix Subscribers over a period from 2015 to 2020. In 2020, Netflix had 204M subscribers, growing by 22% since 2019. Netflix has a paid subscription revenue model, with one free month offered for new users. What’s seriously impressive about this number is that a Netflix paid subscription is just that - access to one particular service with no additional benefits, and yet it still attracts so many people. View the source for this Netflix users chart and other Netflix statistics here. 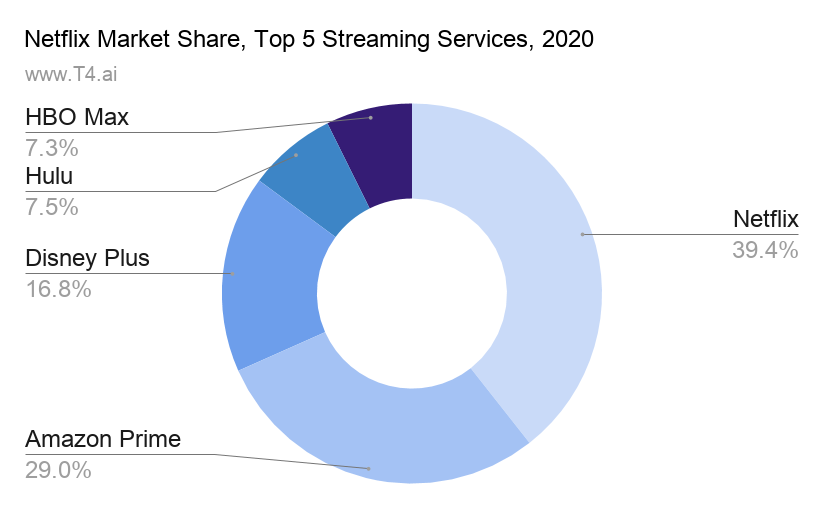 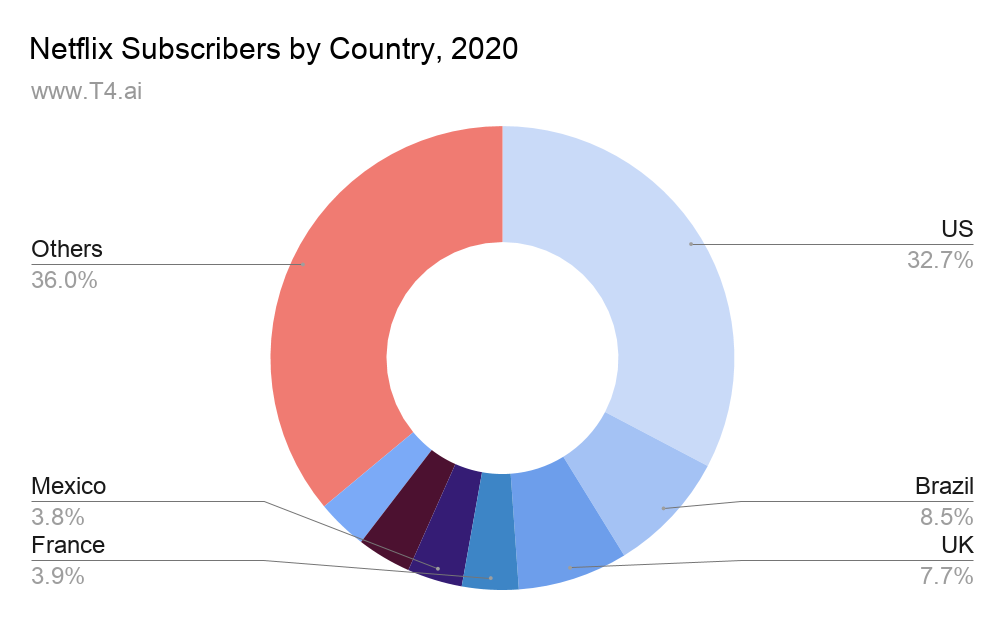 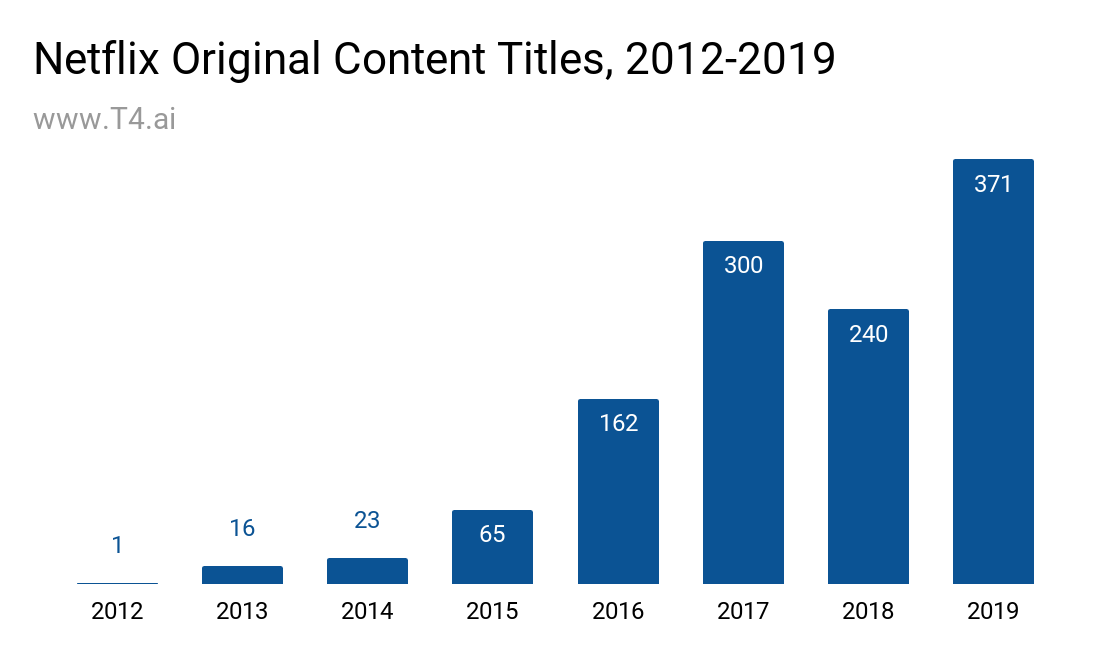 The chart above shows the number of Original Content Titles produced by Netflix over a period from 2012 to 2019. House of Cards kicked off Netflix's path to success among streaming platforms, leading to more and more hits over the years, with The Queen’s Gambit being one of the strongest additions to Netflix’s library in 2020 - a bold move from Netflix indeed. View the source for this Netflix Original Content Titles chart and other Netflix data here. 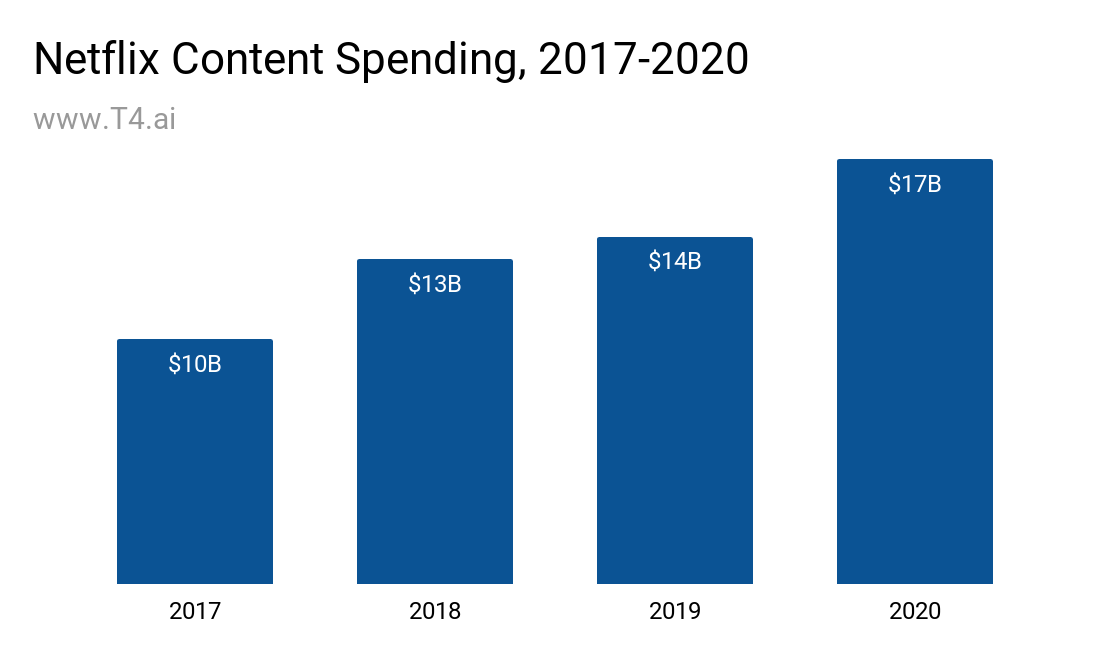 The chart above shows Netflix Content Spending over a period from 2017 to 2020. In 2020, Netflix Content Spending was $17B, increasing 21% from 2019. If more spending means more high quality content like Stranger Things, The Witcher, and BoJack Horseman, one can only hope that this chart continues to grow. View the source for this Netflix Spending chart and other Netflix data here.

Unlike other large companies one often hears about in the news, Netflix focuses on one specific product instead of being a jack-of-all-trades, and to great success. Yes, Netflix has moved to producing its own content instead of being just a distribution service, but the platform remains the company’s core offering. For the past decade, Netflix was almost uncontested in this space, but more and more strong players are emerging in the streaming war, each trying to grab a piece of the home entertainment pie.

Amazon is the biggest competitor, with about 150 million Prime subscribers against 203 million from Netflix. An Amazon Prime subscription opens up a sea of benefits in Amazon’s ecosystem, making it an extremely attractive option for consumers. But that’s not all. Amazon is also catching up with its own original shows such as The Boys, Good Omens, Fleabag, and one day we’ll witness the return of The Return of The King in a TV series format.

Disney Plus launched in November 2019 and has gained almost 100 million subscribers in a little over a year - quicker than the growth of the clone army in Star Wars: Episode II. And yes, the Star Wars universe belongs to Disney, along with Marvel, which means pretty much all of the universes. It’s hard to argue with Baby Yoda, so we very well might see Disney’s platform catching up to both Amazon and Netflix in the near future.

The other 2 major competitors to Netflix are HBO Max and Hulu. HBO Max is an extension from the premium television service HBO, adding in WarnerMedia’s various film and television properties. HBO has less original content than Netflix, but some of the shows are among the most popular in the world, like Game of Thrones and Chernobyl. Hulu is a subscription based video streaming service majority-owned by Disney. Hulu has been ramping up its original content over the last few years, with some of the more popular titles including The Handmaid’s Tale, Catch 22, and 11.22.63. iQIYI is another competitor worth mentioning with a major presence in China, sometimes referred to as China's Netflix.

T4's research team can provide you with competitive landscape analysis, market analysis, commercial Due Diligence, and other market research needs across a range of industries. This includes: the topics described in this article, like Netflix market share, subscriber projections, and online streaming service market growth. Analysis of Netflix’s competitors such as Amazon, Disney, Hulu, HBO, Youtube, iQIYI Inc, and Roku TV. Research into the Video Streaming Market, and related topics such as the Music Streaming Market, Streaming Devices, Streaming Platform, Cloud Storage, Smart TV, TV Networks, and Smart Home. Or research support in other areas of the Technology Sector and other sectors. Find more information about T4's market research services here.