About the Computer Industry

A computer is a machine that can be instructed to carry out sequences of arithmetic or logical operations automatically via computer programming. A computer system includes the hardware, the operating system (main software), and peripheral equipment required and used for "full" operation. Early computers were only conceived as calculating devices. The earliest counting device was probably a form of tally stick. The Roman abacus was developed from devices used in Babylonia as early as 2400 BC. Since then, many other forms of reckoning boards or tables have been invented. Charles Babbage, an English mechanical engineer and polymath, originated the concept of a programmable computer in the early 19th century. Henry Babbage, completed a simplified version of the analytical engine's computing unit (the mill) in 1888. During the first half of the 20th century, many scientific computing needs were met by increasingly sophisticated analog computers, which used a direct mechanical or electrical model of the problem as a basis for computation. In 1941, the world's first working electromechanical programmable, fully automatic digital computer was launched. Computer Market Share is highly concentrated among Lenovo, HP, and Dell. You can find Computer Market Size, Computer Market Share, and other pc market trends and statistics below and you can get help with additional Computer industry market research here. 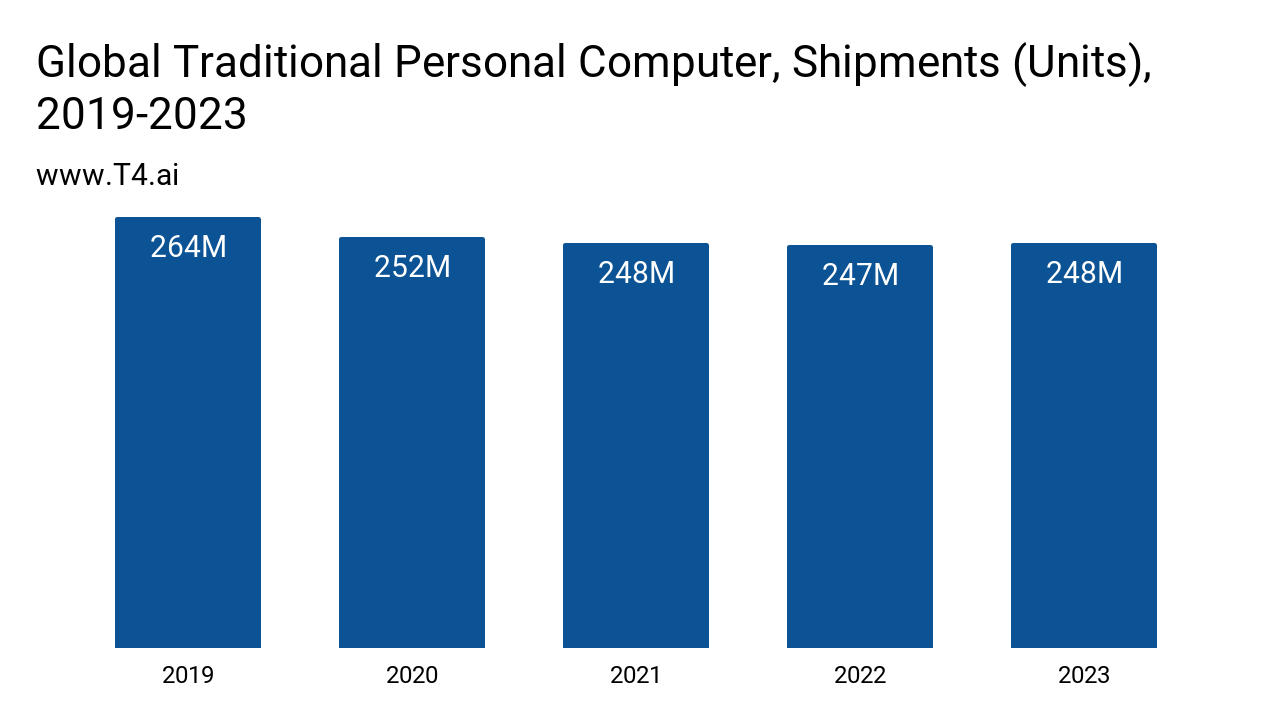 The chart shows the Computer Market Size over a forecast period from 2019 to 2023. In 2020, the size of the Computer Industry was $252M and is projected to decline by 1.6% in 2021. From 2019 to 2023 the Computer Industry decline is projected to average 1.55% per year. These estimates were made before the Coronavirus (COVID-19) pandemic. The short term impact of COVID-19 on the Computer market growth will likely be Medium because an increasing number of consumers, children and employees stay indoors, doing their activities mainly online. The demand for computers increases as electronic devices become an essential tool for the activities at home; but the supply may face difficulties, since factories are operating at a lower capacity. Also, mobile devices will dominate the consumer's demand over traditional PCs. The long term impact of COVID-19 on the Computer market growth beyond the COVID-19 pandemic will likely be Medium because much of the supply chains for laptops and other electronic devices are facing supply constraints as factories are operating at much lower capacity resulting in component shortages. The consumer demand may face difficulties in the long term until production is restored completely. Request help with obtaining the source for this data and additional Computer industry market research here. 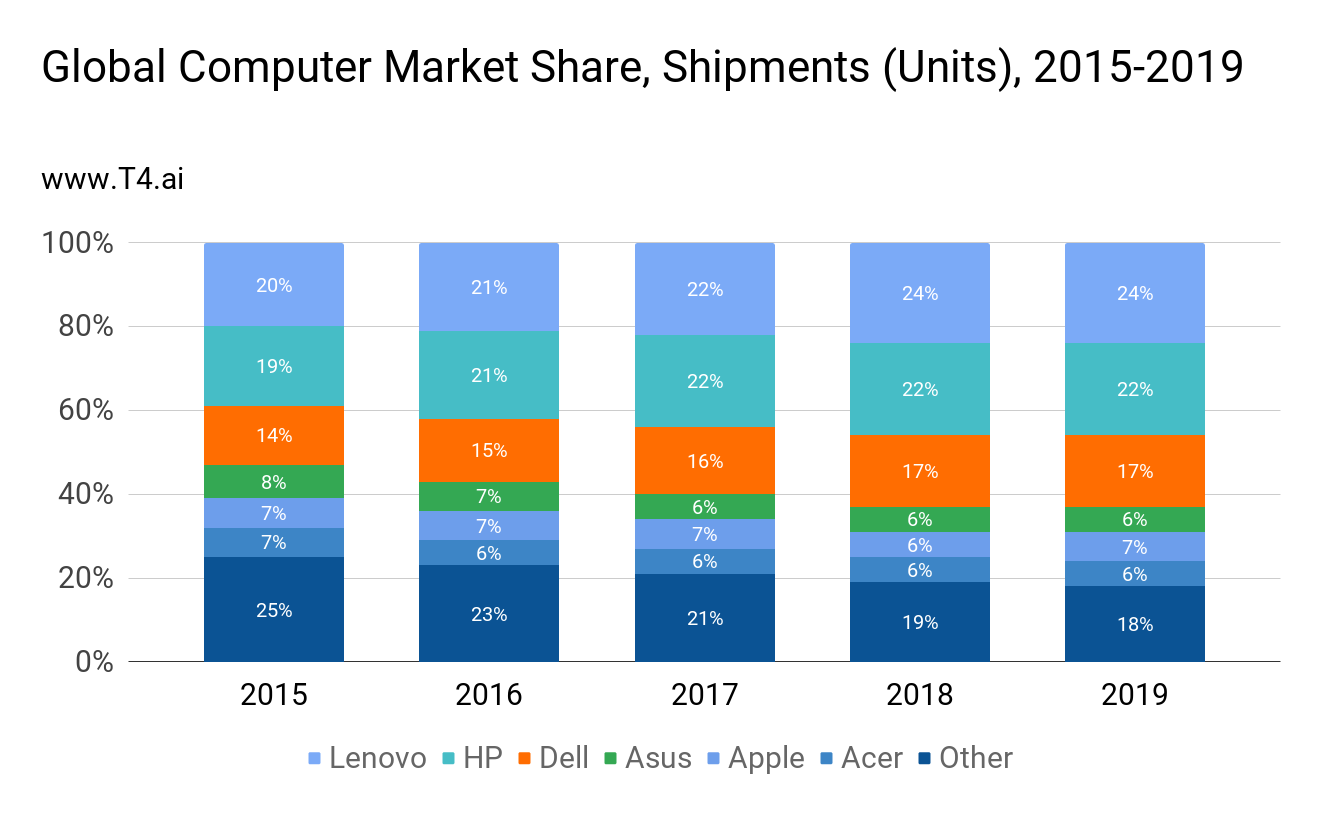 Computer growth is driven by technological developments related to updating operating systems, improvements on processors speed, storage capacity, memory, lighter weight, and development of new features. The growth in the computer market is driven by innovations and improvements which generate demand for replacement of models and upgrades of operating systems, such as the recent Windows 10 upgrade. These innovations and improvements are mainly related to the technical functions of the computers (faster and better processors, higher capacity for memory and storage, development of new features, the smaller size of the CPU, etc). Traditional PCs have shown declining component prices, including DRAM and SSDs, driving the enterprise market as the primary source of revenue.

Computers are a Declining market composed of a few large competitors and many small competitors. Lenovo market share was 24% of the Computer market in 2019. Lenovo leads the market in all regions, with strong growth in Japan, Latin America, and EMEA. In Japan, Lenovo accounted for 45% of the shipments where Lenovo maintains three brands - Lenovo, Fujitsu, and NEC. HP market share was 22% of the market in Computer. HP did a good job navigating the CPU shortages throughout the year. Desktop shipments were particularly strong for HP in Asia/Pacific and Japan, driven by the demand for Windows 10 upgrades in businesses. Dell global market share was 17% of the Computer market in 2019. The growth was largely thanks to a robust U.S. market mixed with strong commercial activity throughout North America and a few other important markets. Japan was a particularly strong country for Dell with triple-digit desktop growth compared to the previous year. Apple computer market share was 7% of the Computer market in 2019. Apple's continued momentum in the iPad and iPhone space have more than offset its challenges with Mac volumes. Overall the company still struggled to maintain positive momentum on a year-over-year basis as it continued to face supply constraints.

What Additional Computer Industry Data Does T4 Have?