About the Beer Industry

Beer, brewed and consumed on every continent, is such a universal drink that its very name comes from the Latin word, "to drink." Beer is the most popular of all alcoholic beverages. There are many different types of beers, such as Ales, Lagers, and Stouts. Beer commonly ranges in alcohol content from 4% to 7%. Consumer trends in the beer industry have brought on the rise of light beer, many new types of craft beer, other types of malt, flavored beer, and hard seltzers. The industry underwent an extraordinary change over the past two decades. Beer sales have stagnated. This has resulted in beer industry consolidation. In 2016, Anheuser Busch InBev (AB InBev), the world's largest brewer, acquired SAB Miller, the world's second-largest brewer for over $100B. The combination of Anheuser Busch market share and Inbev market share made AB InBev market share 3x Heineken market share, the next largest competitor. AB Inbev and SAB Miller are themselves the children of mergers. InBev acquired Anheuser Busch in 2008, and SAB acquired Miller in 2002. At the same time, the industry has seen a blossoming grassroots movement toward craft beer, non-alcoholic beer, and flavored beer. You can find global Beer Market Size, Beer Market Share, and other trends and statistics below, and you can get help with additional Beer industry market research here. 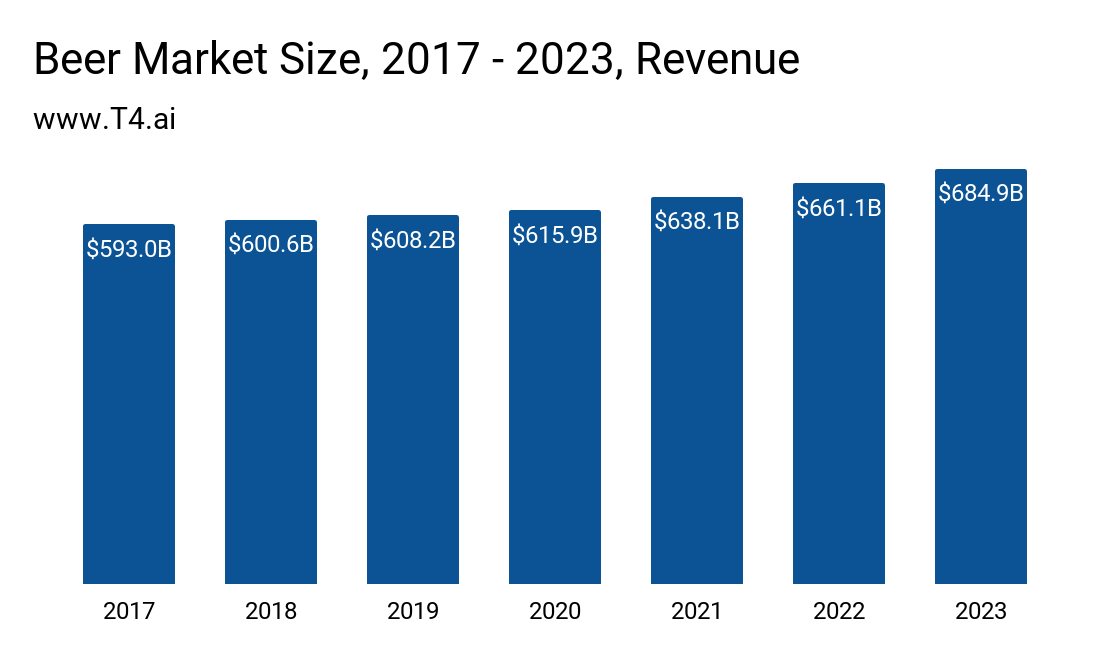 The chart shows the Beer Market Size over a forecast period from 2017 to 2023. In 2020, the size of the global Beer Industry was $616B and is projected to grow by 3.7% in 2021. During the forecast period from 2017 to 2023, the Beer Industry growth is projected to average 2.4% growth per year (CAGR). These estimates were made before the Coronavirus (COVID-19) pandemic. The short term impact of COVID-19 on the Beer market growth will likely be Medium because bar and restaurant closures inhibit an important industry sales channel. The long term impact of COVID-19 on the Beer market growth beyond the COVID-19 pandemic will likely be Low because the beer industry historically sees minimal last impact after recessions. Request help with obtaining the source for this data and additional Beer market research here. 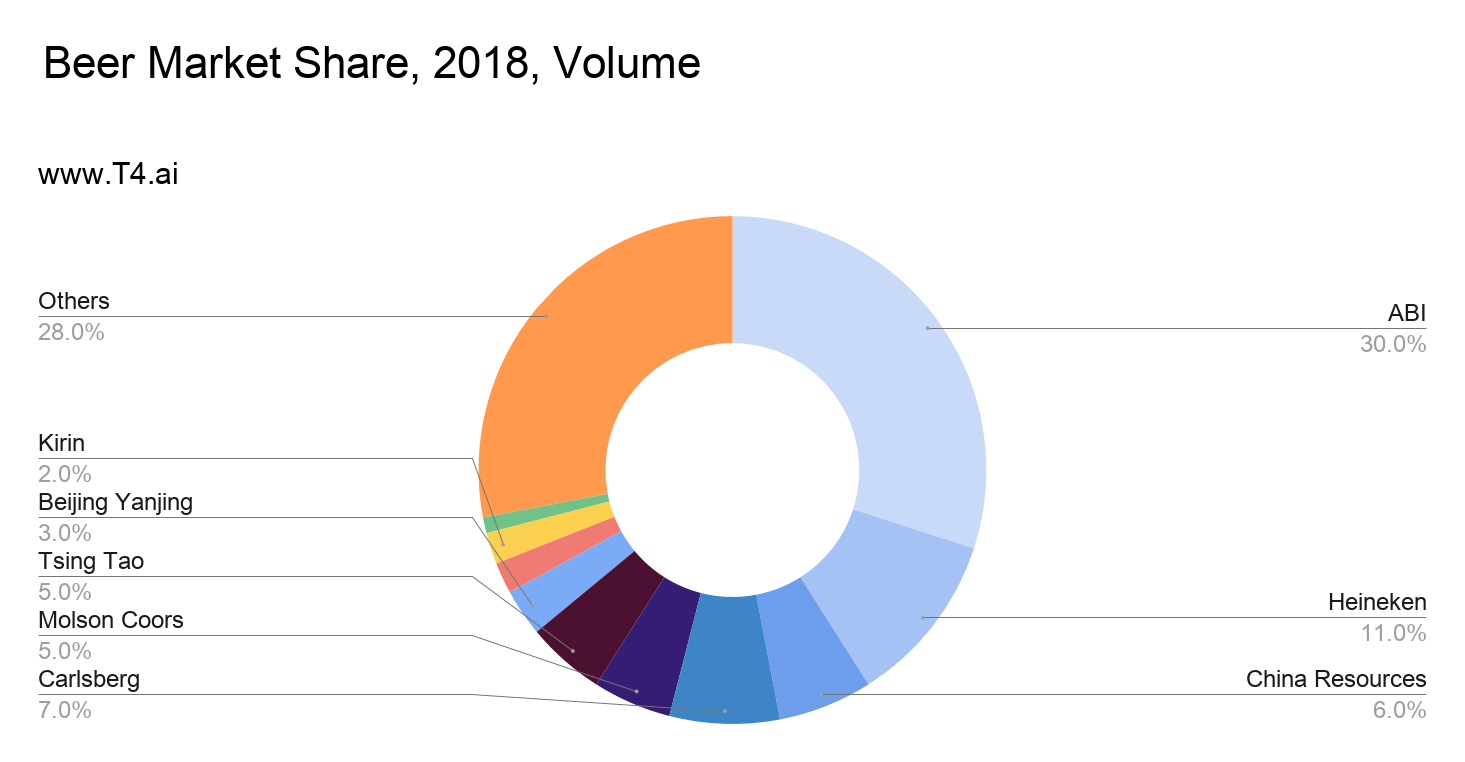 Beer market growth is not quite as exciting as beer consumption. Just three companies represent half of the global beer market share by volume. Organic growth is slow, which means beer market share growth occurs inorganically through acquisition. The consolidation of breweries has not just been regional, but global. US beer market share is even more concentrated than the global beer market share. While the beer market growth is relatively flat, there are bright spots. Consumers now trend more to the allure and taste of smaller craft breweries and craft beers, as well as flavored drinks like hard seltzers. Flavored beer and craft beer growth is more in line with a fast-growing industry rather than a mature one. This is not just a regional trend. It is seen among global craft brewers and alcohol companies as well. We can expect that large brewers will continue to create their own craft beer, malts, and hard seltzer brands, acquire craft breweries, and even acquire the many independent breweries or local breweries that are rapidly springing up worldwide.

Beer is a mature market concentrated among a few vendors with a long tail of many small or independent brewers. AB InBev market share was 30% of the Beer market in 2018. AB InBev is a Belgian based drink and brewing company formed when InBev acquired Anheuser Busch, combining Anheuser Busch market share and InBev market share into the largest beer company in the world. AB InBev further increased its beer market share when it acquired SAB Miller in 2016. AB InBev consists of over 500 brands, including Budweiser, Budlight, Corona, Leffe, Beck's, Miller, Michelob Ultra, and many others. Heineken market share was 11% of the global beer market in beer. Heineken International is a Dutch company and the second-largest beer company in the world. Heineken owns more than 170 beer brands and 125 breweries. Heineken's brands include its flagship Heineken, as well as Tecate, Amstel, Affligem, and many others. Carlsberg market share was 7% of the global Beer market in 2018. Carlsberg Group is based in Denmark and owns over 150 brands led by its flagship brand Carlsberg. Other Carlsberg brands include Baltika, Elephant Beer, Kronenbourg, Jacobsen, and many others. Carlsberg also sells more than 500 local beers. China Resources market share was 6% of the Beer market in 2018. China Resources is a Chinese conglomerate that owns CR Snow, the largest brewer in China. CR Snow launched in 1993 as a joint venture between SAB Miller and China Resources Beer. CR Snow has over 90 breweries in China.

What Additional Beer Industry Data Does T4 Have?

T4's research team can help you learn more about the regional and global Beer industry with market analysis, competitive landscape analysis, commercial Due Diligence, and other market research needs. This includes more in-depth on analysis on competitors in the Beer market, including: Heineken, Carlsberg, China Resources, SAB Miller, Tsing Tao, Asahi, Beijing Yanjing, Kirin, and Constellation Brands; research into related topics such as Alcohol, Liquor, Wine, Retail, Grocery, Soft Drinks, Food & Beverage, and Craft Beer; or additional support in the Consumer Sector or other Sectors. This includes global and local analysis on topics such as US beer and US Craft Beer. Find more information about T4's services here.